My husband tells me we would be invited to more parties if I was content to tell people that I retired after 26 years of being a police officer. But, instead I feel compelled to tell people that, in my retirement, I am working hard and fast on suicide prevention; and would they like to talk about firearms, suicide, hopelessness and what can be done about it all?  I believe that suicides are preventable, that lives can be saved and that what is needed is neither high tech nor particularly hard.
Watch this video to learn what gun retailer, Chuck Lovelace, is doing to help reduce the risk of people committing self-harm during times of crisis.
Collecting data on violent deaths like suicide, homicide and overdoses isn’t morbid, it’s a public health roadmap of what contributes to a significant number of deaths, and we need to know these risk factors. To shrug and say there’s nothing that can be done to stop these deaths denies the known risk factors and clouds suicide in mystery. In reality, suicide isn’t a mystery. It is often the result of treatable mental health disorders, like depression, addiction and substance abuse disorders.
However, if we look squarely at the most common method people use to kill themselves, it’s firearms. Of the over 47,000 people in the US who die by suicide, about half use a firearm.
If I told you that keeping a firearm away from someone who was in a temporary suicide crisis could save their life, you might argue that person would still find another means to die. The truth is, if the method they planned to use—in this case a firearm—isn’t available, they will likely retreat. Even if they substitute another method, let’s say an overdose of medication, it still takes more time to prepare and execute the plan, is far less lethal and it allows time for an intervention or for the person to change their mind. 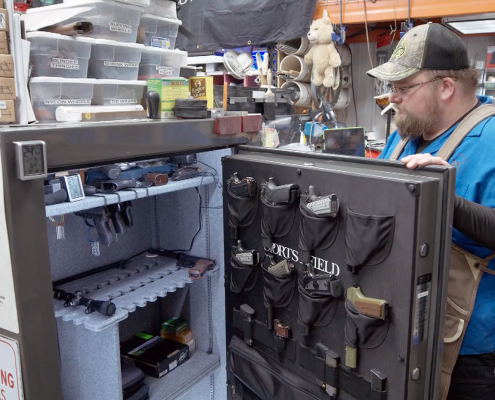 Gun retailer, Chuck Lovelace, reveals interior of the safe where he keeps his customers’ firearms on request.

Let’s say a person has too much to drink, and a friend takes away their car keys, we don’t taunt that friend as being anti-car. At that moment in time, the car was more dangerous to the drunk owner than it was helpful. If you knew someone was facing known risk factors for suicide (a relationship crisis, depression, financial or job problems, addiction, feeling like a burden, facing a medical crisis, etc.) why not step in and tell that friend you would be willing to safely store all of their firearms until they were better? At that moment in time, firearms are more of a risk than helpful.
Temporary safe storage it isn’t anti-gun, it’s anti-suicide. If you’re not sure you know enough to recognize suicide risk, attend suicide prevention training or go online to learn more. The crisis line, 1-800-273-TALK, is there to help you help a friend. Next, reach out to someone in a crisis and tell them you care about them. Make it clear to them that you can’t solve all of their problems, but you can help them find safe storage for their firearms. If you can’t be that safe storage, ask a local gun shop for assistance. Let the individuals at that shop help you find a way to safely store a firearm.
Openly talking about suicide and finding a safe temporary storage of a firearm can save a life.
Author: Jean Papalia, Suicide Prevention Trainer for Safe Communities Madison-Dane County. Watch this video to learn more about ongoing efforts to reduce the risk of people committing self-harm.