Nearly 4 years ago when I was coming home from a family vacation, I saw a new skyscraper being built in Downtown Milwaukee. I asked my family what the building was, and to my surprise, nobody knew. I found it so funny that a city that so many would ridicule and criticize for only having one tall building was finally gaining another one, yet nobody knew anything about it. I decided to do some research of my own, and came to realize that the building was the 7Seventy7; Northwestern Mutual’s luxury apartment tower. I decided from that point on that it would be my duty to inform the public of all of the new and exciting buildings, restaurants, shops and activities that are occurring in the Metro Milwaukee Area. So in that moment I created the Instagram account @WhyMKE, where I share information about all of the new and exciting things that are popping up throughout Milwaukee.
This isn’t your grandparent’s Milwaukee, anymore. Milwaukee is going throughout a renaissance right now and odds are, if you’re not living in the Milwaukee Area, you probably haven’t heard about it. I’m here to break down what I believe to be the 7 biggest, most important projects contributing to the ‘new’ Milwaukee. 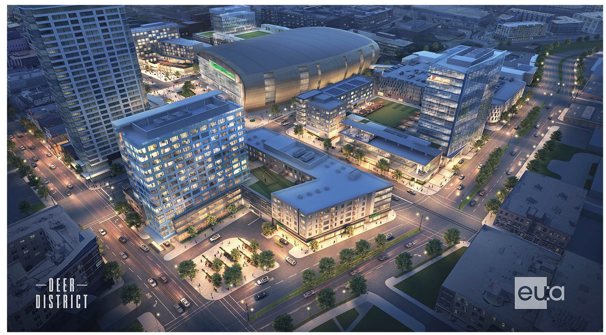 In honor of our recent World Champions, let's start with some Milwaukee Bucks related content!
To fully understand the complexity of the Deer District, one must first understand the predicament that the Milwaukee Bucks organization faced in the mid-2010s. In 2013, (then Deputy, now current) NBA commissioner Adam Silver toured the Bradley Center, and concluded that it wasn’t up to par with the other NBA arenas in North America. In 2014, the NBA gave the Milwaukee Bucks an ultimatum: the team was to either have a new arena completed or close to completion by the start of the 2017-18 season, or the team would be bought from current Bucks owners Marc Lasry and Wes Edens, and moved to either Las Vegas or Seattle.
Lucky for us, the new Bucks owners were no ordinary “sit on their hands” type of people-- These were “big money” New Yorkers, who were determined to make an impact in the Milwaukee market. Thanks to a sizable donation from former Bucks owner and former Senator Herb Kohl, the Bucks Association was able to move forward with developing the new arena for the city. However, the owners wanted more than that. The Bucks owners wanted to develop a space where people could come and spend an entire day, if not longer-- not just come for a game, and then head home. They wanted to make a true destination. They vowed to make an area dedicated to the Milwaukee Bucks where people could live, work and play, and thus, the Deer District was born. 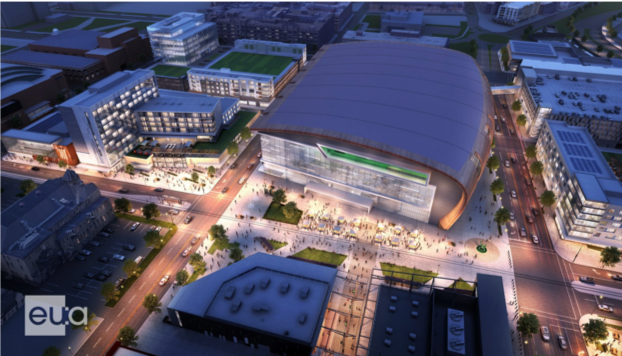 The development of the Deer District has been divided into 4 phases, with only the first phase complete so far. Phase I involved construction of the Fiserv Forum, the plaza, a beer garden, The Mecca Sports Bar & Grill, an event space known as Gather at Deer District, the Drink Wisconsinbly Brewpub, Good City Brewery, Insomnia Cookies, the Bucks new training facility, and the 550 Ultra Lofts apartments.
At this time, not much is known about Phases II (north of the Fiserv Forum), III (northeast of the Fiserv Forum) and IV (the former Bradley Center lot). However, it has been revealed that a new 9-story, 205-room luxury hotel would be built on part of Phase II. The Bucks plan to fill up the rest of the Deer District over the next decade with new office towers, apartments, restaurants, shops, and even Milwaukee’s first 5-star hotel! Construction on their first hotel, known as The Trade Milwaukee which will be built in the phase II lot, will start in September, with a completion date scheduled for early 2023. 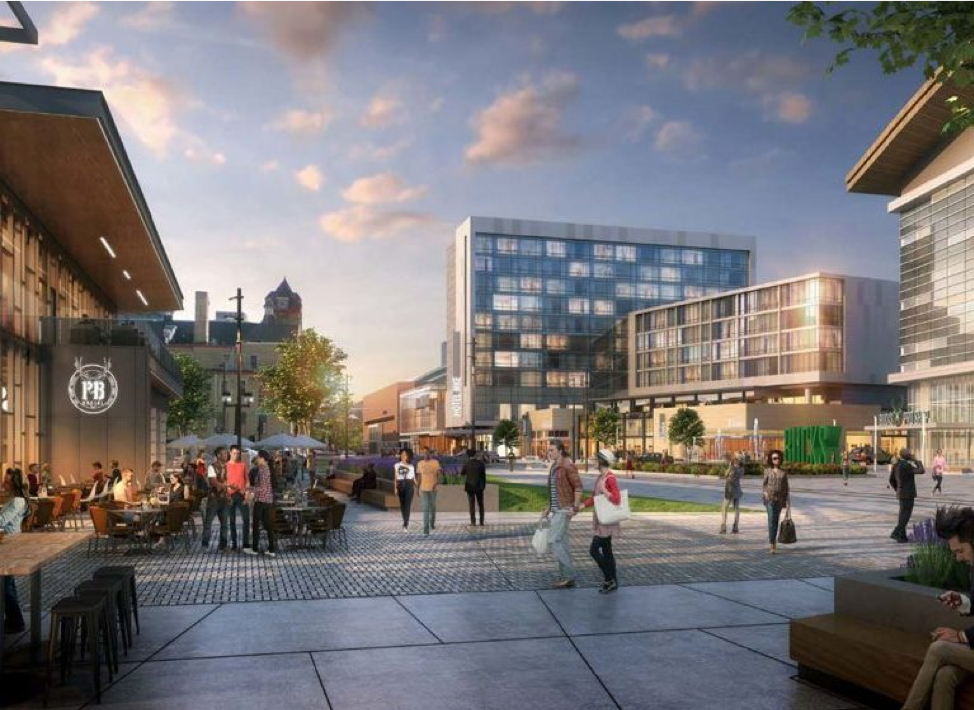 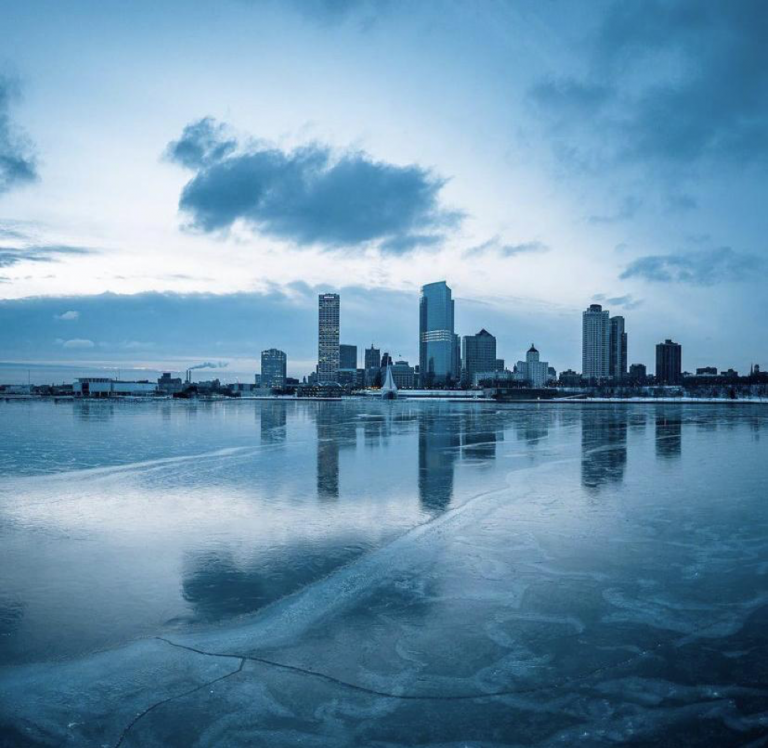 Up next are three projects that are poised to not only change the feel of Downtown Milwaukee-- but also its look! There are three new skyscrapers that have been approved to all be under construction by the end of 2022, and all of them, in one way or another, will be record breaking.
First, and (according to many people’s opinion) most importantly, is The Couture. What will be the tallest apartment building in Wisconsin, and the 4th tallest building in the City of Milwaukee, the Couture will stand at 537ft/44-stories tall, and will be located at 909 E Michigan, right across the street from the Milwaukee Art Museum, Discovery World, and the Henry Maier Festival Grounds where the largest music festival in the world, Summerfest, is held each year. By comparison, the US Bank Center stands at 601ft tall, the Northwestern Mutual Tower and Commons stands at 550ft tall, and the 100 East Wisconsin office tower stands at 549 ft tall-- however, from most points of view, they all will appear at equal heights. 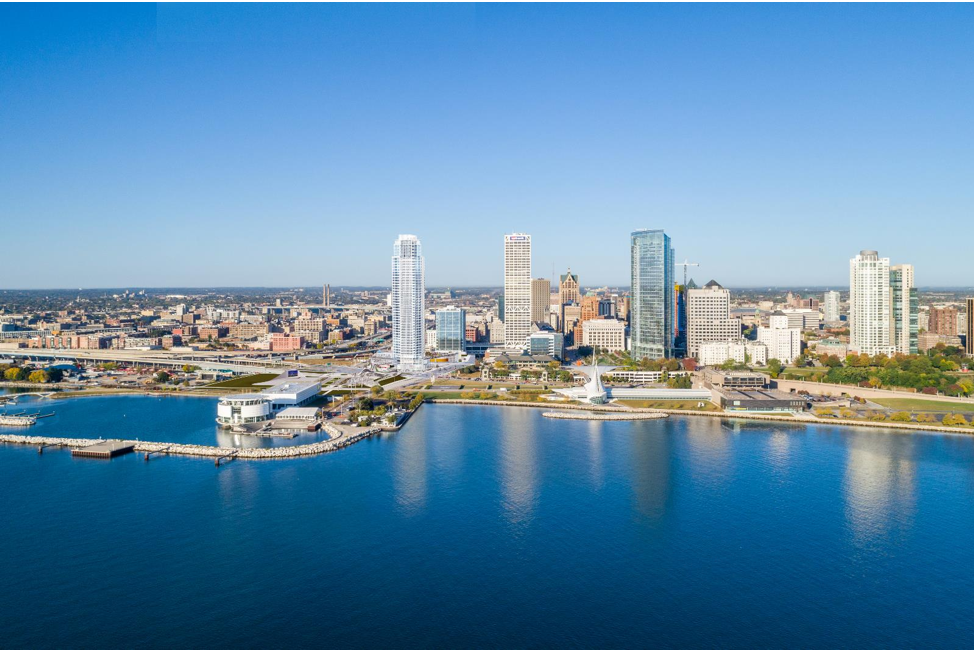 The Couture will include 322 apartments, 42,600sq/ft of restaurant and retail space, pedestrian bridges, a 1,100-space parking structure, several parks and plazas, and a new transit concourse with stops for the Milwaukee streetcar’s Lakefront Line and a stop for Milwaukee’s new East-West Bus Rapid Transit Line. The building will serve as so much more than just an apartment building-- it will essentially be used as a connector for the lakefront to the rest of downtown. The Couture started construction in May of 2021, and will be completed by Fall of 2023.
The next skyscraper that will be under construction in 2022 will be the tallest building in the Historic Third Ward, Milwaukee’s prime shopping district. Located at 333 N Water St, the building will be 365ft/32-stories tall. Simply known as 333 Water, the building will include 295 apartment units, a 400-stall parking structure, several retail spaces, bike storage space, a dog lounge, an amenity deck, pocket parks, and a connector path that directly leads to the Milwaukee RiverWalk. If everything goes according to plan, it could start construction in May of 2022, and would take about 22 months to build. 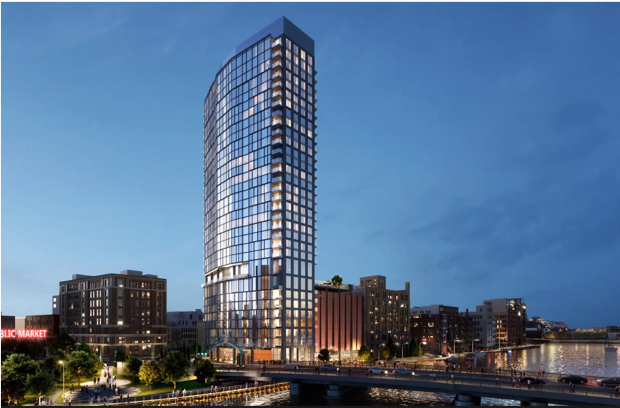 Finally, the third skyscraper that will be under construction in 2022 is the Ascent apartment building. Located at 700 E Kilbourn Ave, Ascent will be 283ft/25-stories tall, and will include 259 apartment units, a fitness center and pool on the 6th floor, two outdoor decks, a clubhouse, kitchen, and coworking space. But what makes this structure really special, is that (aside from its parking structure base), it will be built entirely out of wood! In fact, once completed, Ascent will actually be the tallest mass-timber building in the world! Mass timber is a type of genetically modified wood built to withstand fire, to the point where it will only char, and not completely burn. Mass-timber is also much less expensive and far better for the environment than the usual materials used for construction projects. Construction started on this tower in Fall of 2020, and is expected to be completed by August of 2022. 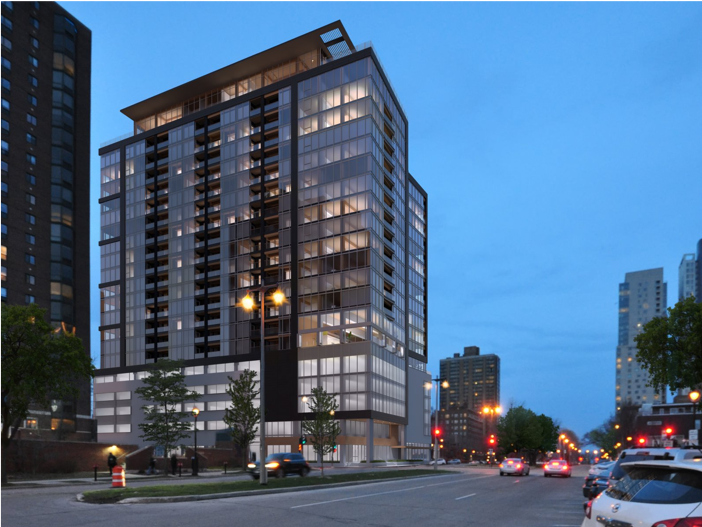 The North Side: ThriveOn King

About a dozen blocks north of the Deer District sits the former Gimbels-Schuster’s Department Store building, which has been left idle as warehouse space since the 1970s. However, thanks to a new development, the building at 2153 N Dr. Martin Luther King Jr. Dr., will sit idle no more.
The building will be stripped of its iron wall that has kept its beautiful facade hidden for decades, and will be restored to its former beauty. The redevelopment is set to include many different uses, including office space, apartments and community space.
The Medical College of Wisconsin’s community engagement programs, as well as the Greater Milwaukee Foundation both plan to move their offices into the 6-story complex, with the goal of making a greater impact on the community they serve. Nearly 40,000 square feet of community space will also be available on the first floor, with the upper levels of the building including 77 one- two- and three- bedroom apartments (with 53 of those being affordable units for low- and moderate-income residents).
The project started construction in the spring of 2021, and is expected to be completed in May of 2022.

The West Side: The Community Within the Corridor 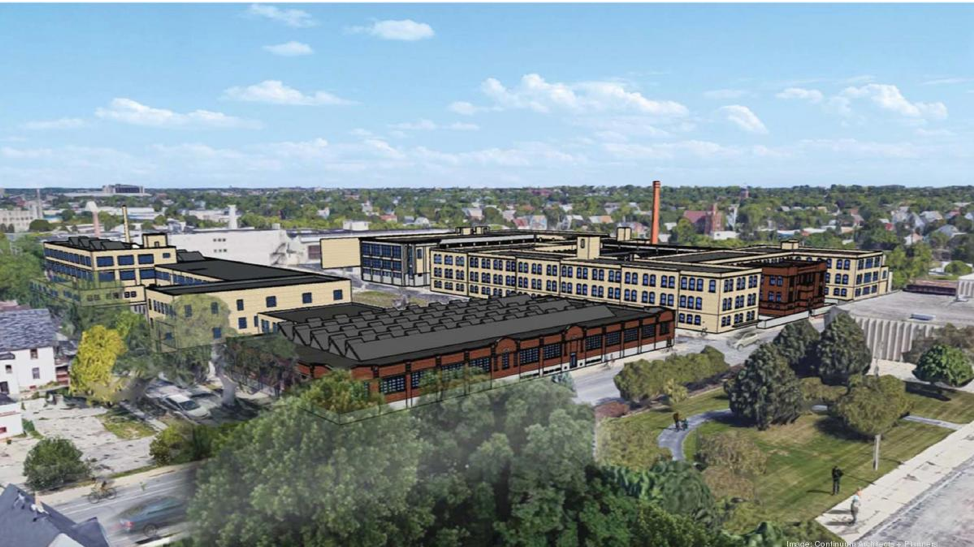 The next project that I believe will have a huge impact on the Metro Milwaukee Area, is a project known as ‘The Community Within the Corridor’. The Community Within the Corridor is a 7-acre mixed-use development project located on Milwaukee’s West-side along North 32nd St & north of West Center St.
The project, which is already in progress, involves renovating 6 buildings and turning them into 197 affordable housing units, office space, a laundromat, a daycare, an entrepreneurship center, a business accelerator, a recreation center, 2 community lounges, a food hall, podcast studios, recording studios and a dance studio. The Center Street Marketplace Business Improvement District as well as Young Enterprising Society both plan to move their offices to this development.
The goal of this development is essentially to create a brand-new neighborhood that people won’t have to leave in order to have all of the necessities to live a normal, healthy life. If everything continues to move according to schedule, it could be completed by April of 2022. 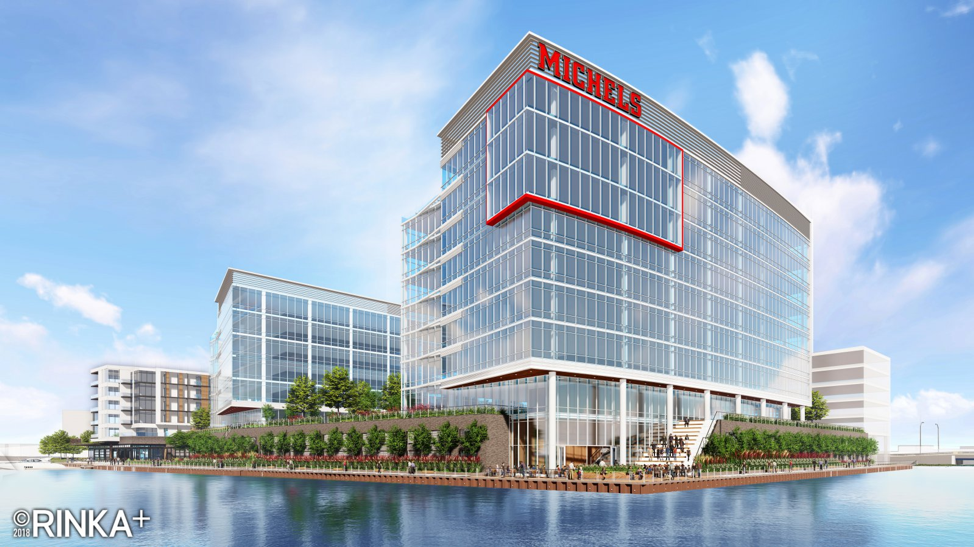 Finally, on the city’s south side, a new mixed-use project is under construction. Known as R1ver (pronounced River-One), the new 5 building development located on the corner of S 1st St, W Becher St, and bordered by the Kinnickinnic River, will include two office buildings, a hotel, two apartment buildings, several retail locations, nearly 1,000 underground parking spaces, a neighborhood park and an expansion of the already expansive Milwaukee RiverWalk trail.
The office building, which is nearly complete, will be 8-stories tall, and will be the home to the Michels Corporation’s new Marine Division HQ, with more than 100 new jobs. The Tribute Apartment complex, which is also nearly complete, will be 5 stories tall, with 95 apartments and first floor retail.
The developers plan to wait to move forward with construction on the second office building until the first office building is fully leased, and then they will also move forward with construction of the hotel, as part of the final phase.
--
In addition to the projects mentioned above, there are countless other projects being built throughout the city that are contributing to the renaissance of Milwaukee. Be sure to stay up to date with all new restaurants, shops, buildings and activities in the Metro Milwaukee Area by following my Instagram account, @WhyMKE, so that you too can take part in bringing new life to this great city.
---

Nate Plotkin: DMW Intern // Nate follows his passion project of informing the public of all of the new and exciting things occurring throughout the Milwaukee Area. When he’s not learning about the future of Milwaukee, he’s studying at Central Michigan University, with a major of Broadcast & Cinematic Arts with a minor in Film.

2 comments on “The New Milwaukee”