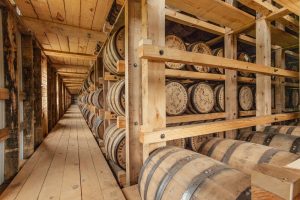 Did you know that Wisconsin is quickly becoming known for Wisconsin-born bourbon? The rumors are true! Communities across the state are promoting locally hand-crafted spirits that are mostly made from fresh, Wisconsin grains produced at farms in the surrounding areas. Buckle up and get ready to hit the Wisconsin Bourbon Trail for an unforgettable tour highlighting local distilleries and their own unique spirits and stories! 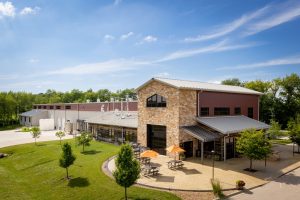 Tucked in the vineyards of Cambridge, Wisconsin lies the popular Dancing Goat Distillery! This distillery is home to their very own gin, barrel aged brandy, and award-winning whiskies putting them on the map of The Wisconsin Bourbon Trail! The focus at this distillery is consumer education to help teach visitors about their own palate along with spirits and the incredible terroir of Wisconsin. Dancing Goat’s private stock bourbon was released as part of the distillery’s single barrel program. Each bourbon barrel was personally selected by retailers for their stores. By law, straight bourbon must be aged at least two years in a new, charred oak barrel. Each barrel is unique and interesting in what it brings to the table while the bourbon is aged to perfection. Starting with the basics of bourbon, the most predominant notes are oak, vanilla, and caramel so the new oak barrel is key in this original melody!

Dancing Goat Distillery also has a barrel aging Rickhouse on its property! It was built as a traditional Kentucky-Style Rickhouse with barrels stacked on their sides within a rack system vs palletized on end in a typical climate-controlled building. Having this designed as a rack allows the terroir and elements play a bigger role in capturing their products' one-of-a-kind flavors. It also creates a microclimate for humidity and temperature, the perfect conditions for a brilliant bourbon!

The Rickhouse was built to ventilate and respirate in one direction to create a consistent aging process over time. Aging is the most important part of crafting a beautiful bourbon. It turns whiskey to gold, physically and metaphorically. Be sure to stop by and try their colorful, flavorful, gold bourbon! 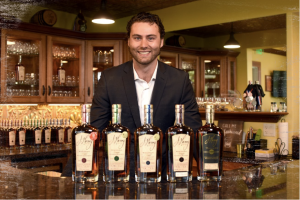 Follow along the bourbon trail to the next stop at J. Henry & Sons located in Dane, Wisconsin since 1946! Originally, this business began as a seed farm growing and producing 1500 acres of seed corn, wheat, and rye. Three generations later, it is still alive producing its own whiskey from the heirloom grains grown right on the farm!

In 1939, W335A, the iconic seed corn varietal was raised by Jerry Henry, the man who created the roots of J. Henry & Sons on this very property. He grew these seeds for 30 years from the 1940s through the 1960s. The new family generation used these very seeds as their foundation to create the ultimate and most unique bourbon.

Henry & Sons quickly became well known to be the first place in Wisconsin that did bourbon-specific tours. Many people thought you couldn’t make bourbon outside of Kentucky… but J. Henry & Sons proved them wrong with their delicious creations! Their goal is to capture the flavor of their land and region and be able to give it to others through their treasured bottle of whiskey!

Their award-winning bourbon to recognize is the annual Limited Edition Anniversary Blend release that encompasses their state-of-the-art blending process of mixing all ingredients and letting them rest before bottling to allow everything to marry. This process gives the product more depth and complexity. They also are famous for their Small Batch Blend which is a blend of 20 barrels that complement each other. This creates a universal bourbon wonderful for creating masterful cocktails to enjoy! 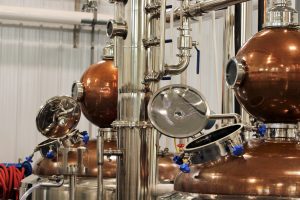 Head Northeast and continue along the Wisconsin Bourbon Trail to Fond du Lac, Wisconsin, home of Ledgerock Distillery! This craft distillery is located directly on the Niagara Escarpment. With such a marvelous location, they have access to the purest limestone-filtered water as well as their own grains straight from their farm.

Ledgerock Distillery was born and raised by local farmers of the area. They had the ability to grow and harvest their own ingredients to craft their very own spectacular spirits like their bourbon. It is a small family-owned business that oversees all operations first hand from mashing, and fermenting to running stills!

Typically bourbon is made from corn, rye, and barley, however, at Ledgerock Distillery they use soft red winter wheat instead of rye for a twist. This creates an earthiness to the whiskey that will surely get you hooked and keep you coming back for more! This distillery is the heart of Wisconsin innovation at work, going from farm to distillery in no time! 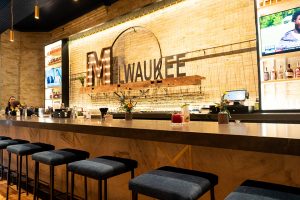 Hit the tail end of the trail in the heart of Milwaukee at Central Standard Craft Distillery for merchandise, an extensive menu, but most relatable, their brilliant bourbon. The idea came from the two founders who got together over bourbon and rye whiskey. They realized that this is the glue that brought them together and made a go of it, igniting an all-new passion for spirits!

This distillery opened in 2014 and took off from that point forward. It began as a side business for the two but quickly grew to be a flourishing full-time job! In fact, they now have the capability to not only produce phenomenal bourbon and other spirits, but also age and bottle high quantities for you to taste, try, and enjoy!

Being located centrally in Milwaukee, they have great access to locally produced goods and ingredients to keep their spirits high quality and of utmost freshness. Be sure to try some of their classic cocktails made in-house by their creative mixologist! To celebrate the true pride of Wisconsin’s roots, try their delicious Old Fashioned.

From The Producer & The Host 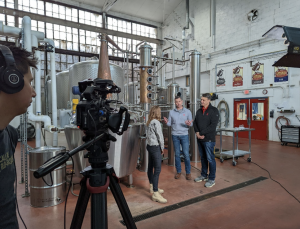 Discover Wisconsin host Andrea Boehlke experienced the entire episode and filming of ‘The Wisconsin Bourbon Trail’. She shares her take on the production and distilleries here:

“I had an absolute blast filming The Bourbon Trail episode! It was fascinating to learn about how bourbon is made right here in Wisconsin, and this episode really highlights how different each Wisconsin distillery is. From a newer distillery like Ledgerock in the middle of the country to J.Henry and Sons who were the first to do on-site bourbon tours to the fun and social atmosphere at Dancing Goat to exploring a city distillery like Central Standard- you really get to see how each distillery has their own, unique approach to bourbon.

I always thought bourbon was only a Kentucky thing but turns out, I thought wrong! The most fascinating thing to learn for me was that the cold Wisconsin winters and changing seasons only help to influence the bourbon flavor. I can't wait to go back to each distillery on the tour!”

We also got the inside details from one of our Discover Wisconsin producers, Bryce Erlandson, on his thoughts on the entire production from start to finish:

“The Wisconsin Bourbon Trail was such a fun (and delicious) episode to work on! Whiskey has always been a favorite spirit of mine and having an opportunity to sprinkle in little factoids about the bourbon-making process made this feel like a uniquely educational episode. As someone who is newer to Wisconsin, I loved visiting all of these distilleries to learn about their own unique takes on bourbon and what makes Wisconsin bourbon unique. It turns out that a big thing that several of the featured distilleries have in common is farming. It makes complete sense that Wisconsin farmers would be interested in using their plentiful corn and grain crops for making whiskey and I'm so glad that they did! Before filming this episode, I wasn't very familiar with "wheaters", which is when wheat is added to the mash bill (often in place of the rye), but I love how it softens and smooths a whiskey's bite and leans into the bourbon's sweetness. I can't wait to keep exploring our local craft distilleries!”

Now that you have the roadmap to tour around the state at these fine, featured distilleries, it’s time to visit! Along the way, you’ll not only taste state-of-the-art bourbon but learn about the processes that go into hand-crafting these spirits. You’ll also experience each distillery's unique take on bourbon using their original formulas from generations ago that make for the best bourbons of the state.

But don’t think the trail stops here! Be sure to check out Discover Wisconsin’s own interactive map of the Wisconsin bourbon trail here: