/ Discovering The Routes Of Jefferson County

Discovering The Routes Of Jefferson County

Did you know that Jefferson County has a deeply rooted legacy of connection? It’s true! They carry-out this legacy by honoring the many modes of transportation and routes that connect the community together! Jefferson County enhances the opportunities to explore their county on anyone's desired form of transportation; from biking, to paddling to motorsports, and snowmobiling in the winter months. They make it easy to discover their multiple routes and the many outdoor adventures that await! 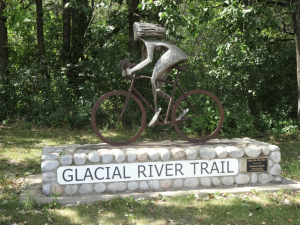 Start exploring Jefferson County and its legacy of connection by biking! But first, grab a cup of coffee at Berres Brothers Coffee Roasters, which is known for their exquisite flavored coffees. And if you aren’t sure what flavor is right for you, you can take their quiz here and get ahead of the game!

After you start off your day with a deliciously crafted coffee, you’ll be ready to hit the trails. Or should I say rails? This six mile stretch of paths was built over the abandoned Chicago Northwestern railroad track. It once ran on the Janesville to Fond du Lac line. It is the Glacial River Biking Trail! And don’t worry if you don’t have a bike, 2 Rivers Bicycle and Outdoor has got you covered from recreation shopping to renting equipment and gear to hit the trails!

Along the Glacial River Biking Trail, there is a red covered bridge that stretches over the path. It was built in 2000 from early 1900s barnwood, designed to look like a train caboose to commemorate the history of the railroad track underneath the bike trail. And along the way, be sure to keep an eye out for the statue, ‘Ride Like the Wind’ immersed in the Wisconsin greenery placed along the path in memory of Marcie Roahen, an avid biker who frequently used these trails before losing her life to cancer. This statue was created by a Fort Atkinson artist to capture the energy she exuded.

As you continue along the trail, the once historic railroad leads to Jones Dairy Farm, which was originally a railcar loading dock to the Chicago Northwestern railroad. But now, it’s now an ice cream parlor and market! Jones Market carries locally sourced and gluten-free products. Right nearby, Jones Park holds many events like Baseball Fest, home of the Fort Atkinson Generals Baseball Team. What once was a busy railroad that transported goods for the Chicago Northwestern Rail Company along the Janesville to Fond du Lac line, now serves as a scenic trail system to connect people to nature, to Jefferson County towns, to the history that found these routes and of course to each other. 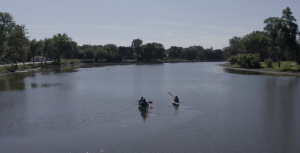 After getting your blood pumping by biking, relax and paddle your way through Jefferson County on the Rock River Trail! Once again, 2 Rivers Bicycle and Outdoor shop offers more than just biking gear…they have it all, including all your water adventure needs! This trail can be accessed by 155 different access sites. Download the complete map here to start your paddle down the Rock River Trail.

If you chose to rent a kayak, right along the river route, you’ll want to first make a stop at a local food joint called The Heron’s Landing for a quick bite to eat. They have a variety of drinks and food to enjoy including soups and salads, entrees and pasta, and the classics like burgers and pizza. Not to mention the beautiful and scenic view of the river!

Hop back on the river and make your way to one last stop… ice cream! Did you know that Jefferson County is the dairy capital of the country? It’s true and Frostie Freeze in Fort Atkinson takes pride in its delicious sweet treats.

All in all, kayaking down the Rock River does not disappoint. It’s as easy as grabbing a magical meal along the way at Heron’s Landing, and of course stopping by Frostie Freeze to top off the perfect summer day in Jefferson County. 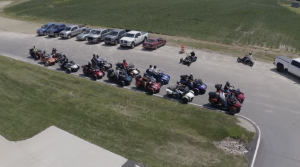 If you’re more of a motorsports fanatic, you can kick it up to high gear in Jefferson County, home to three nationally recognized motorsports dealerships including Rock River Powersports, John Hartwig Motorsports and Rob’s Performance Motorsports. As you can see, it’s truly the mecca of powersports.

Grab a motorcycle from any of these dealerships and ride along the open road amidst a countryside backdrop and feel ultimate freedom. Make your way to Aztalan State Park, home to the grounds of Wisconsin’s first town! Aztalan is a reminder of how important routes are for connection to places and people.

If motorcycling isn’t your thing, there are plenty of other great routes Jefferson County offers. These routes have fostered connection between people, places, and goods for thousands of years. Today, Jefferson County continues to build and maintain important routes that interconnect its towns, businesses, and people, allowing a sense of community to truly thrive. 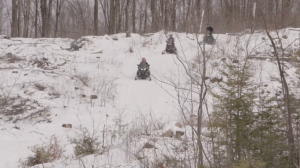 Even in the winter, the routes of Jefferson County connect the community by snowmobiling! There is a great snowmobiling route from Waterloo to Lake Mills, but before you begin your excursion, first make a stop for…food! Route 19 Cafe is highly recommended by the locals in the area, especially employees of Trek, a prominent business in Jefferson County.

When you’re ready to suit up and hit the trails, there are plenty to choose from that highlight the beautiful rolling hills of the county. The trails are all interconnected, allowing people to get from one town to another as well as to many great restaurants and businesses throughout.

A winter highlight by snowmobile is heading to the Lake Mills Knickerbocker Ice Festival where there are several events including softball on the ice! After all the fun, check out the ice bar, originally built by a group of people who have been building an ice henge for the past four years, and this year was no exception. And before you head out, walk over to the ice sculptors and see them at work creating frozen pieces of art.

But these aren’t the only artists at the event, more ice sculpting can be seen downtown! Visit Commons Park to take a ride on a horse drawn carriage around the park to get in the merry season. In addition to these unique featured events, there’s many more to participate in including corn hole, the chili warmup, fat tire biking, and the event’s parade featuring Knickerbocker Royalty.

And when the day reaches an end, head over to the Dog and Shrub Distillery for some live music, food and beer. Another local hangout to check out is the Pyramid Event Venue for more live music and drinks. And the best part? Jefferson County wants to protect their citizens, and therefore created a SafeRide program that offers residents free ride pick ups and drop offs from and to their home so everyone can stay safe! 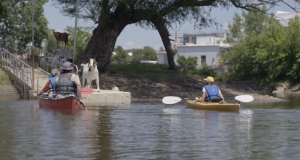 AnaElise Beckman, producer of the latest episode, “The Routes of Jefferson County” shares her thoughts on the entire filming of the episode:

“Filming the Jefferson County episode was hands down one of my favorite experiences working as a producer for Discover Wisconsin. It has been an absolute blast getting to know the community here. I kid you not, by the end of some shoots everyone was hugging each other. Everyone has been extremely welcoming and I can tell this is a place that invites new people in and immediately makes them feel at home. It’s incredible. It has also been really amazing to see how the community supports small businesses and vice versa.”

“The episode highlights towns and businesses throughout Jefferson County via various routes and trails. Throughout the making of the episode, riding these routes really shed light on how interconnected the County is. You can hop on a bike trail and get from one town to another without leaving the trail at all. The river runs right through the County as well and there are multiple drop off sights to launch a kayak or canoe from allowing for another mode of transportation from town to town. Also, everyone should go to goat island. That place is hilarious.”

“The last thing I’ll mention is that the food scene in Jefferson County is awesome. There are local dining hotspots right along the river and others that are in quaint little downtown areas. The atmosphere of each one was really unique. Some were elegant, some were cozy and some just exuded that nostalgic diner feel. Not to mention, the food and staff at each one was great! I also love how close to Madison and Milwaukee it is. If I hadn’t just bought a place, I would definitely be looking at homes in Jefferson County. Sometimes, I even find myself wishing I had a place there right now haha.”

Now that you know Jefferson County is deeply rooted in its legacy of connection, it's time for you to check out the many routes that connect the community together like biking paths, to paddling routes to high-speed motorsports, and snowmobiling in the winter months. Let the adventures begin!